Yes, this is late–you think I don’t know it’s March 7th? During the last week of February, I ended up on a four day business trip to Nebraska, which I’m still recovering from. I’m blaming it for not reaching my reading goals (see below) and writing goals (*gesticulates wildly at timestamp* nyeh). But that’s not all! Fitness goals. Study goals. Needlepoint goals. Really, it irreversibly damaged my life. I’ll never catch up. 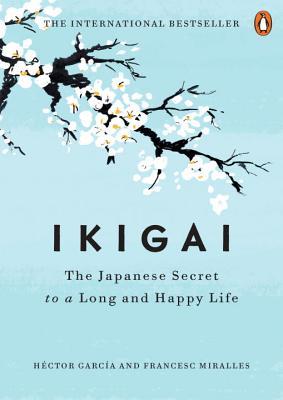 Garcia and Miralles travel to Okinawa to interview residents of a village that has the world’s highest percentage of centenarians–those overachievers who live to be over 100. They explore the Japanese concept of Ikigai, meaning “a reason for being.”

I often ask myself, What is the point of me? What am I doing with my life? Why am I not doing anything more fulfilling or worthwhile? Why am I not rich yet? It makes me angry knowing I’m not living up to my full potential. I was born for greatness. To have servants and live in a castle and lord over lesser people. I think–nay, I know–there was a mix-up at the hospital. My real parents are out there, dictating or something.

I picked up this book to find answers to those questions and also because The Little Book of Hygge: Danish Secrets to a Happy Living by Meik Wiking was already checked out (Danes, amirite?). After reading this, I’ve concluded I don’t really need to live that long, especially if I have to follow the diet rule of Hara Hachi Bu, which is eating until you’re 80% full. That just doesn’t seem right. If you’re not eating until you feel like you’re about to pass out, you’re doing it wrong. Everyone knows that.

LIBRARY – The book looks nice on a shelf, but it would just stay there. Unloved. Never to be touched again. Until a fit of passion seizes me at midnight and I rearrange my shelves.

At seven, Jude’s parents’ killer steals away her and her two sisters to live in the High Court of Faerie. Years later, in her struggle to fit in among the fae and win a place at Court, she attracts the ire of Prince Cardan, the son of the High King.

I thought this would take place entirely separate from Black’s earlier works, but I was delightedly surprised that characters from her Tithe series make an appearance. Roth Roiben Rye is BACK, baby. Which, of course, means I have to reread those books (again) before the next in this series comes out.

I love hate-to-love romances. This wasn’t one. At least, not yeeeet. *wriggles eyebrows* I keep forgetting Cardigan’s name. But that’s okay. He’s delightful. I will never tire of tortured, dark princes, especially ones you can make fun of and still find attractive.

Introducing the Ancient Greeks: From Bronze Age Seafarers to Navigators of the Western Mind | Edith Hall

I think the title says enough?

I’m attempting to delve into Ancient Greece for funsies. While reading primary sources from writers like Homer and Herodotus, I’m trying to bulk up my understanding with texts like this (recommendations are entirely welcome). This was a nice introduction, but I found myself skimming the last few chapters. And some of the middle ones. And a few at the beginning. I’m not being tested on this material, so I’ll do what I want, thankyouverymuch.

LIBRARY – Though super informative and well-written, I can’t see this being one I’d reference again and again.

Jeremy Johnson Johnson is an outsider in his small town. His most notable peculiarity: he hears the voice of Jacob Grimm. Grimm takes it upon himself to help Jeremy get good grades, to keep distractions like Ginger Boultinghouse at bay, and, when children begin disappearing, to keep Jeremy and his friends alive.

You know that horrible show on ABC? The super corny one where they just cut and paste fairy tales? “Once Upon a Time” or something?

I was expecting that when I read this (only, you know, better).

I didn’t get that.

Since it’s narrated by Jacob Grimm, I wanted fairies and wicked stepmothers and people hacking body parts off. The only supernatural bit is Jacob himself. The danger the children find themselves in is entirely realistic. In a way, that makes it more terrifying. But this gives me mixed feelings. I applaud the author for managing to make the story feel magical without any magic, but I also really wanted that fantasy element. How can I be an escapist if you throw reality in my face? I also wish the novel had focused more on Jacob’s character. Who cares about the kids? They’re supposed to be devoured.

LIBRARY – While I liked it, it’s probably not something I’d read again.

What was your favorite February read?