As I endure this admittedly mild Minnesota winter, I recall last year’s summer vacation, where I spent a week melting my face off in Orlando with my boyfriend (we’ll call him Jerry) and his family. We went in August, which is, in all honesty, the best time to travel to Florida. Any travel guide worth their salt will tell you so.

We arrive at the airport and pick out our rental car. I push for the Camaro, the Mustang, the Charger, the Corvette.

In an Impala, we drive to Jerry’s uncle’s for a quiet, relaxing dinner.

Over fifteen cars are parked in the driveway and along the street. As we slowly clamber out of the car, wondering if we have the right house, a man in a pickup with Alabama license plates jumps the curb and parks on the yard.

We tentatively walk in the house and are bombarded by family we haven’t seen in years. My social anxiety kicks in, but I smell food so I endure.

Because we haven’t had a bite to eat all day, Jerry and I stare longingly at trays of egg rolls, fried rice, and kebabs of lemongrass pork. One aunt tells us to dig in, two other aunts shoo us away, making us wait for the toast.

The toast? I wonder.

That’s when I notice the women in dresses. The men in suits. The cake. The flowers.

In horror, I realize I’ve walked into My Big, Fat Vietnamese Wedding.

The rest of the night is spent stuffing my face in the living room, hoping I don’t stink too much in my stale traveling clothes, and trying to stay awake because humans suck the life out of me.

We drive through a sudden downpour to buy an umbrella at Target.

I’m coerced into doing this. Note: I’m the one laughing her ass off and yelling, “wee” while the other screams in terror.

I have so much fun, I make her go a second time. Note: Her screams are just as shrill and terrified. My laugh is just as maniacal.

We go to Daytona Beach. Our practical little Impala holds five, but as more of Jerry’s family arrives, our number increases to six. Four of us try to squeeze into the backseat and, though we are small people, I end up sitting on the floor, praying that we don’t end up in an accident or that a police officer doesn’t spot me looking like a disgruntled pet sitting at my boyfriend’s feet.

At the beach, the water is cold and the waves are rough. I do not go in past my waist because of sharks and jellyfish and riptides and, for all I know, alligators. Though I love to be in the water, being a Midwesterner who has only seen the ocean a handful of times, I am terrified of it. It’s, like, really big or something.

I’m too busy staring at the ocean’s vastness to notice the wall of black clouds that has gathered behind me. Naturally, it isn’t until after I change out of my swimsuit that I feel a drop. And another. And then it starts coming down sideways. Jerry and I make a mad dash for the car, leaving the rest of the family to finish packing tents and chairs and the kitchen sink.

His mother grabs her purse from the backseat and rides off with an aunt so I don’t have to sit on the floor again. It isn’t long before we realize she has the keys.

Trapped in the hot and sticky car with Jerry’s younger siblings, we watch from behind fogged windows as the rest of the family struggles to leave.

An uncle’s rental car takes a nose-dive into the soft white sand and has to be dug out.

The Target umbrella remains dry at the house.

I experience all of the feels at Hogsmeade. A Death Eater wand chooses me at Ollivanders. I buy a chocolate frog and Bertie Bott’s Every Flavour Beans at Honeydukes. Over a Butter Beer, I try to convince Jerry that I’m a Slytherin. He tells me I’m a Hufflepuff. Vehemently, I hiss, “I eat Hufflepuffs for breakfast!” 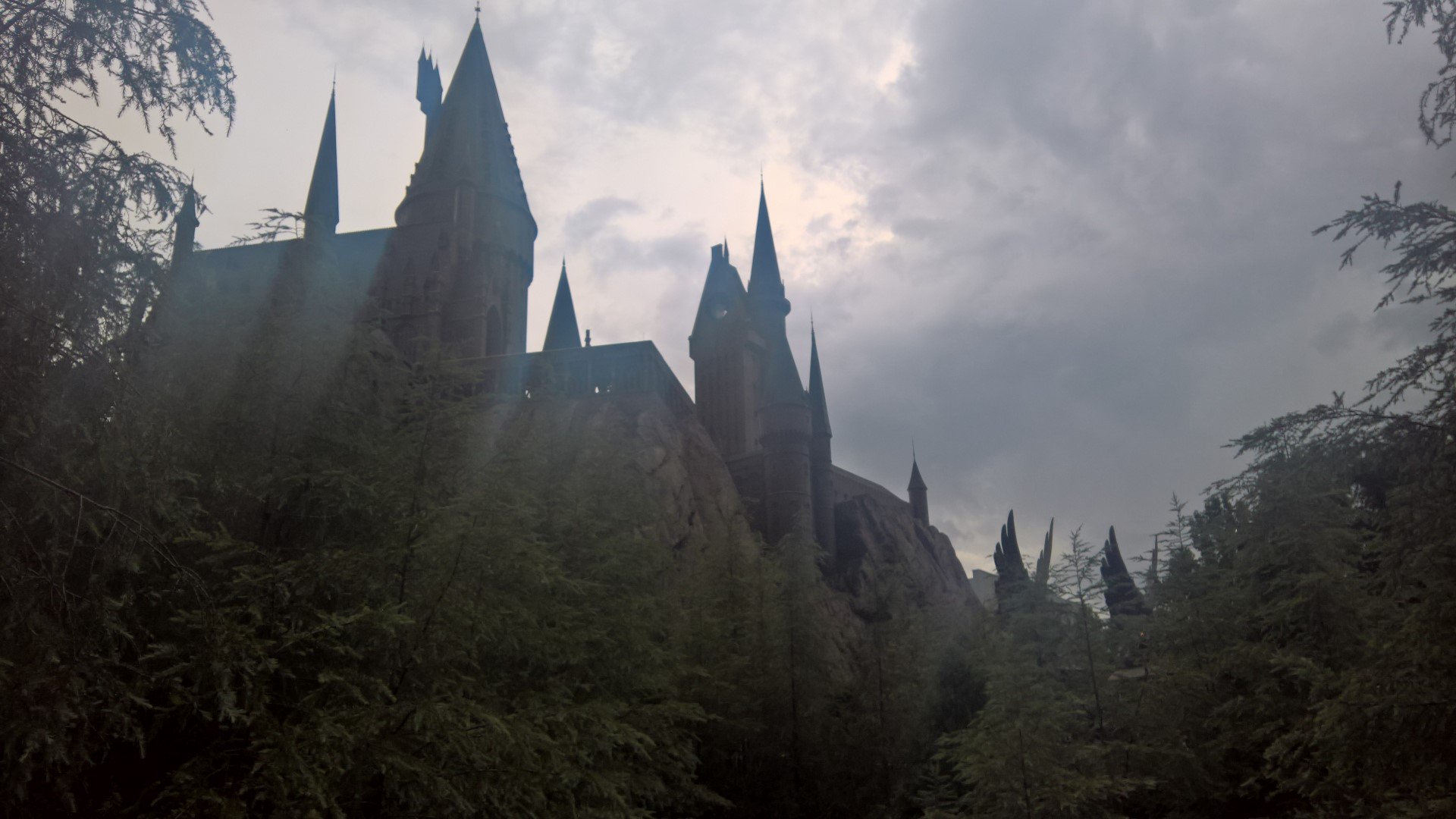 As the day progresses, my upper lip begins to feel swollen. Everything, everything, begins to itch. By the end of the day, my face throbs and there’s not a spot on my body that hasn’t turned mottled and bubbly. The culprit? The new sunblock I bought to replace the one I lost in the chaos at the beach the day before.

To make matters worse, my clothes cling to me from the sudden downpours and humidity you can swim through.

The Target umbrella remains dry in the car.

We use this day to recover. My swollen hands and feet ache. I develop a cough and lose my voice. I fear I’ve caught pneumonia from one of Jerry’s family members, who has been hacking up a lung since the day we arrived. I drug myself, mutter incoherent babble, and sleep most of the day.

At midnight, I wake and have a mental breakdown. I’m hungry and sore and I’m sick of people. I take a walk and chase after tiny lizards. When I’m about to start swinging, I force Jerry to drive me to Taco Bell.

I eat the best damn chalupa I’ve ever had. The fast food, which I had been suffering withdrawals from, soothes me. The murderous rage subsides.

We visit the Kennedy Space Center. I spend most of the time feeling like an insignificant speck because space is, like, huge or something. I watch Jerry marvel at all the science and shit.

It is the one day that doesn’t rain.

The Target umbrella remains dry in my purse.

I survive another day of family reunions and engorge myself on pho, which I had been anticipating for weeks. It is amazing and fills my soul–or, rather, makes me feel like I have one.

We pack for the early morning flight. I have to shake my belongings out to uproot the colony of tiny ants that have taken up residence in our room and have been biting us all week. Earlier in the week, we shared the floor with these little devils until we stole an air-mattress from Jerry’s younger siblings. Sometimes being high maintenance and vocal pays off.

There are hugs and heartfelt goodbyes. My farewells are perhaps the most eagerly spoken.

Our plane arrives in Minneapolis. After a somewhat awkward car ride with my dad and Jerry’s family, we arrive at home.

My dog wets himself in excitement and nearly wheezes to death.

My brother steals my Gryffindor keychain.

I get White Castle’s for breakfast and cannot be happier to be home.